Goblet of the Truth

The book of the entire Teaching of the Prophets

In this book, "Goblet of the Truth", the true prophet of the new time, "Billy" Eduard Albert Meier, known as BEAM, is once again providing the human beings of Earth as well as extraterrestrial races and peoples with a very significant work of truly universal uniqueness. Originally, he had intended to undertake this eminent and highly expressive transcription in the year 2017. However, for important health reasons, he was induced to set down this extremely valueful written bequest, indeed one that is steeped in history, at an earlier stage. The first lines originated on Sunday 19 August 2007. After only 5 months and 17 days of intensive work, he completed the task on Tuesday 5 February 2008.

In the course of these 171 days, concealed from our hectic and restless planet and in the seclusion of the Semjase Silver Star Center at Hinterschmidrüti, and during many nights, an epochal manuscript comprising 260 A4 pages was created. This work, being only a provisional conclusion of Billy's untiring work, is in its bound form structured as a long series of highly instructive pearls of evolutive shine which have been penned by his hand to date, and which form the psyche and the consciousness. The very short time taken to complete the book even surprised his extraterrestrial friends, since they had themselves expected the completion to require several years. The tome comprises a total of 28 chapters.


Goblet of the Truth

On February 5, 2008 BEAM ("Billy" Eduard Albert Meier) finished his largest and most important work after only 5 months and 16 days (171 days). This book, "Kelch der Wahrheit" (Goblet of The Truth), which will survive the coming ages, live on forever and find its way far out into the Universe, must also find a fast and efficient dissemination here on our Earth, so it can be effective and reveal its value to the people who come in contact with it. The value of this work shall be discovered for generations and be able to become a friend and continuous companion in all situations in life.

Ptaah … and what is of immense importance for the "Kelch der Wahrheit": since it is actually the most important work as far as the entire mission is concerned, you should endeavour to have the book translated as quickly as possible into the most important languages prevailing on Earth. The book should be disseminated worldwide as quickly as possible, since it is of particular importance that it makes its way out into the entire world.

Billy … concerning the translating of the new work, "Kelch der Wahrheit", there will no doubt be difficulties because it must be professionally translated which costs a tremendous amount of money – money that we do not have at our disposal. In this case it would be necessary that responsible-minded human beings with sufficient financial resources step in and support this work as sponsors. To find such responsible-minded human beings may be very difficult because whoever is financially rich has, as a rule, no need to support the effective truth and its teaching as well as a teaching through which human beings are able to find within themselves the path of true love, peace, freedom and harmony and to carry these high values out to the entire humanity on Earth. The human beings on Earth would rather donate – because they are religious, sectarian, ideological, or philosophical believers – a lot of money to religions, ideologies and philosophies as well as for wars etc., because they believe to be able to buy their salvation or security. They hope to enter heaven in this way and be allowed to humble and worship in the heavenly dust at the feet of their imaginary god; or they hope to be protected from terrorist attacks in their country etc., when supporting wars from which they also hope to benefit when putting their money into them.

Ptaah Unfortunately, your explanations correspond frighteningly to the truth, but in spite of this you must endeavour to realize the translation and distribution of the work.

Billy Of course we will persevere, but here on Earth there are not very many well-off human beings to be found who would take the responsibility to help selflessly. Responsible human beings for donations are more likely to be found in our Core Group and Passive Members Group as well as among friends and interested individuals who help with our mission and the teaching of the effective truth. In this way, small contributions could come together and with time accumulate to the point where one day the "Kelch der Wahrheit" could at least be translated into English; for which we could also bring in a skilled person having perfect command of both languages who could do the work, but only for a fee. Of course, a translation into Arabic and Chinese would also be very important. The Japanese translation would definitely be looked after by the members of FIGU Japan; they are very assiduous and have already translated various books and writings. At the moment English, Arabic, Japanese, Spanish and Chinese would be the important languages.

Ptaah I also assess the entire situation in the same way and I think that at the moment the most important language that the "Kelch der Wahrheit" has to be translated into is English, but Arabic, Chinese, Spanish and Japanese may not be disregarded after which other languages must be considered as well. You all will endeavour, that I know. Until the whole becomes actual, there is still Guido's book which you are correcting and, according to my request, are also editing.

Billy We work on it every week two times, at least as far as it is possible for Andrea. But it is moving ahead well.

Ptaah That's good to hear and I would not like to neglect to articulate my thanks to all those who are assisting which is also valid for all the others who are actively helping with the difficult mission and tackle everything so that steady progress and success are recorded. I would also like to direct my thanks to all the members of the worldwide Group of Passive Members as well as all the friends of FIGU and those interested in the Mission, who help with their financial contributions so that the Mission can bloom. My thanks should also go to all those Earth human beings, who in the coming future will continue to stand by the Mission and also support it financially as far as the necessary translations of the books and other writings into other languages are concerned.

Billy Thank you for your words, and I am certain that you will also receive the thanks of those who feel spoken to.

Ptaah The thank is due to all those who recognize the truth and importance of the Mission and exert themselves to live up to it and help so that it can bear good fruits, regardless of whatever type of efforts are always given.

Billy Those are good words and I agree with them.

Ptaah Since I'm already on this topic I for once would also like to send my special thanks to all the members of FIGU-Japan because what they do and manage to accomplish is admirable. They all do a really very large and valuable work whose worth cannot be overlooked.

Billy I also agree with you concerning this, because it is actually incredible what remarkable human beings they are and what they accomplish. I would also like to mention our core group members in the same breath, because without them, the mission would not have been able to progress to the worldwide scale of what it is today. It is also unthinkable where everything would be today if they all had not brought to bear their abilities and financial resources and had not stood by me. We have to thank them all for everything on the great successes as well as the members of the passive group, FIGU-Japan and all the other FIGU groups as well as friends worldwide who support us financially and also support the Mission through their own efforts and actions and continue to do so in the future.

Ptaah My deep appreciation goes out to them as well.

Billy Thank you for your words, which everyone will learn of when this conversation is made public.

Clarification for the Goblet of The Truth and Its Legal Distribution

“Billy” Eduard Albert Meier as author and sole copyright holder of the work “Goblet of The Truth” has decided for the disclosure and free of charge release of the most important work of the New-Time-Mission. Instead of the usual, conventional “Copyright”, a strict prohibition that does not allow a work to be copied or distributed under any circumstances, the “Creative Commons license” chosen by “Billy, and which is valid worldwide, states clearly and in a legally compliant manner that the work or, to be precise, the content may be copied, distributed and made publicly available.

This right, however, is without exception completely bound to the following conditions, and in a form that is worldwide, legally effective and unambiguous:

Attribution
You must attribute the work in the manner specified by the author or licensor (but not in any way that suggests that they endorse you or your use of the work).

Noncommercial
You may not use this work for commercial purposes. This also includes the
distribution of copies at cost price.
No Derivative Works
You may not alter, transform, or build upon this work.

Although the abridged legal position presented above is clear and absolutely unambiguous it appears to have led to irritations by some English speaking persons. Instead of distributing the released work according to the license, they removed the name of the author (point 1) as well as the appertaining German text which must always be included in the “Goblet of The Truth” under all circumstances, and without exception (point 2). According to the license a removal of any part of the “Goblet of The Truth” corresponds to transforming the work which is strictly prohibited in this case.

For this reason we once again clearly remind all those who do not comply with the included license and distribute or offer illegally modified copies of the work “Goblet of The Truth” (or other works of Billy or FIGU that are under the same license) that a violation of the Creative Commons license cannot be tolerated by Billy and the FIGU Society and we will take legal action against all violations.

We also would like to ask all persons who stand close to the Mission to immediately report to us violations or ambiguities in regards to the license.

The complete license text in English will be published in the near future in the online version of this document. Until then the short version can be retrieved from the following address:
http://www.figu.org/licenses/by-nc-nd/2.5/ch/deed.en_US 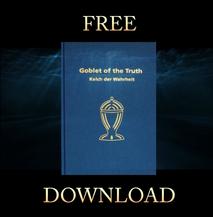 Goblet of the Truth

The Goblet of the Truth is now published! 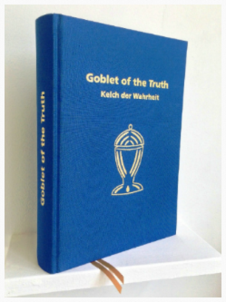 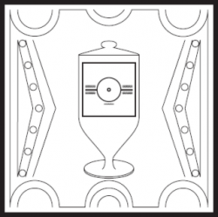