Symbol for the Spiritual Teaching 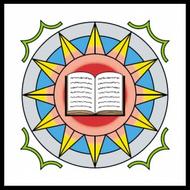 The teaching of the living refers to all facts of the human existence, the consciousness-based and entire mental evolution, as also to the virtues, the development of the personality and of the character, to the correct mode of life, to the interpersonal relationships and to the partnership, and so on and so forth. The spiritual teaching on the other hand is directed towards all creational and natural principles in every respect, but also to the creational recommendations, which are valid as recommendations for following, in order to fulfil the laws of the Creation.

Over around ten thousand years ago the teaching was passed on more or less only verbally and only very sparsely offered in written form. This led to the fact that sectarian blood religions and religious or semi-religious organisations were able to entwine fabulous mysteries around the spiritual teaching, which led to enormous falsifications – until the present time.

The laws and recommendations of the Creation and the nature contain the actual teaching of the spirit, whose spreading is the most important task of the ‘Free Community of Interests’ with Billy Eduard Albert Meier.