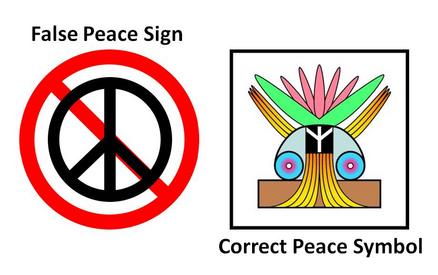 Spreading of the Right Peace Symbol

​​The supplement sheet, entitled the Peace Flyer, shows that the distribution and spreading of the right peace symbol is of the utmost importance, because the wrong peace symbol, the so-called death rune, i.e. the turned upside down Algiz- or Elhaz-rune is still interpreted absolutely incorrectly in its actual meaning and is totally underestimated and misjudged/misunderstood in its outcoming effect. Contrary to the claims of many esotericists, this rune has absolutely nothing to do with peace or life, but embodies the absolute opposite of it. In addition, symbols - although they are fundamentally intrinsically neutral - have effects on the unconscious, uncontrolled and undirected behaviour of the human being, who does not defend himself/herself against his/her  own negative and destructive swinging-waves and impulsations, does not fight back and who triggers it himself/herself due to the symbolism of the death rune, and simply lets himself/herself be overrun by them and acts them out uncontrolledly.

For that reason only the correct peace symbol should be used, the symbolism of which is unconsciously absorbed, interpreted and understood by human beings as constructive, soothing, peaceful and progressive, through which he/she also builds up corresponding swinging-waves and inpulsations in himself/herself, and gradually beings to act them out.

The ample spreading of the correct peace symbol and its common acceptance among the population and can effect very much that is positive and good and lead to a general calming and equalisation in these difficult and dangerous times.

Peace Flyer -  An explanation by Ptaah regarding the false peace symbol